Gary Owen
On Sunday 13th July 2008, Gary Owen’s life was quite literally shattered. The 42-year-old long distance HGV driver from Peterborough was working on the Olympics project in London at the time.  However, on 13th he was riding home on his Aprilia RSV 1000 Tuono from Mallory Park, when he was involved in a high-speed crash.
Paramedics rushed him to Coventry Hospital where he remained unconscious for three days.  Gary had sustained a number of serious injuries, especially to his left leg, which had four open fractures below the knee and one above.  He also sustained extensive skin loss to his right thigh.
The fracture to the bone above his knee (the femur) was pinned and plated, but the open wound breaks below (the tibia) were so severe and complex that an external fixator was required.  Around 50% of his right thigh needed skin grafts.  Gary remained hospital for four weeks.
There then followed six months of rehabilitation at home in Peterborough. Unfortunately, at the end of this it was found that none of the bones had joined – called a nonunion.
Gary was therefore fitted with a new external fixator, which he wore for a year. 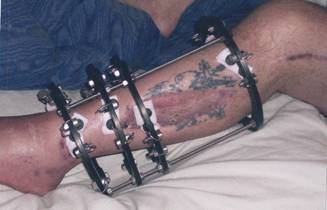 A year and a half after his accident, Gary’s skin grafts had largely healed. However, the fractures in his left leg were still only showing signs of some initial healing.  They were not correctly aligned either.  Gary has type 2 diabetes, which can delay and make healing more difficult.  It was therefore decided to remove the fixator for six months to see if this would encourage healing.
There then followed two years of various leg casts, trips to orthopaedic specialists in Sheffield and Peterborough and extensive physiotherapy.  At the end of this, the plate in the upper half of Gary’s left leg was removed and the femur was re-pinned.  More walking to improve the strength and circulation in the left leg to aid healing was prescribed, but this was without effect.
Finally, in December 2012 Gary was referred to Addenbrooke’s Hospital.
It was then found Gary’s attempts at walking might have actually been aggravating the problem, as his bones were still soft and unhealed.  Gary was given three choices:
1. To have an amputation above the knee.
2. To have a full knee replacement that would give him half his original range of knee movement back.  This, however, was a risky option because it involved a site where there had previously been an infection.  Any reoccurrence of this could lead to full leg amputation.
3. To clean out the knee and to insert a solid rod running from his hip to his ankle.
Gary chose this final option.  He had his operation June 2013.  He says, “Things have moved forwards so much since then; I have made so much progress.  I can now walk short distances without crutches.”
Of course, such a major operation has complications.  As expected, Gary is unable to bend his leg at the knee.  However, he has also lost 2 inches in leg length and been left with a very stiff ankle meaning he is unable to place his heel to the floor.  He was receiving physiotherapy for this at Peterborough City Hospital in January when he saw a card advertising St George’s Community Hydrotherapy Pool and decided to refer himself.
He says, “I wish I’d known about St George’s and been able to come earlier.  On my first session, I was able to put my foot flat to the floor.  In the pool, I can walk about; I have freedom of movement for the first time in five years.  It’s so much easier and less painful in the warm water.  It gives me respite and relaxation too.”  Gary now attends the pool weekly.  His physiotherapist at the hospital noticed an improvement after just a few sessions.  However, more than that Gary says that since coming to the pool he has a new positive frame of mind.  “I have the confidence to walk and attempt more, such as the stairs.  I feel able to do more for myself and more positive about moving towards going back to work and about the future."
After six years of rehabilitation, most recently at the pool, Gary has now returned to work. He is a full-time lorry driver for Chiltern Cold Storage, Peterborough. Gary says he is thoroughly enjoying his new busy life. Hydrotherapy is still important though and he makes time to attend a weekly pool session.